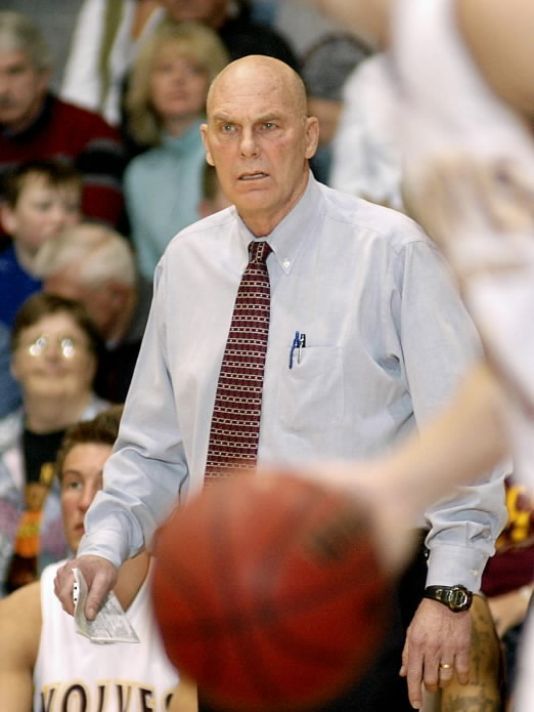 Things We Have To Learn Every Year (download)
by Don Meyer

You Can Pick Captains But You Cannot Pick Leaders (The Foxhole Test)
When we think our team is ready each year, we have our players take the foxhole test. They draw a circle to represent their foxhole. They write their name at the front of the foxhole. They draw a line at their rear, their left, and their right. On each of those lines they write the names of teammates they would want in their foxhole
if they were fighting a life and death battle. The position to their rear is worth three points and is awarded to their most trusted, courageous, and tough teammate. The position to their left is worth two points and is awarded to the second most trusted, etc. teammate, and the position to their right is awarded to the third teammate they would pick and is given a value of one point. This test cuts through all the friendships, cliques, and is the truest measure of what players really think of their teammates. It might be a good idea for each coach on the staff to do this with his/her coaching staff, administrators, teach associates, and of course your team. There are many people who you would love to have around on the golf course or in a duck blind but deep down you know that defeat is assured if they are in your foxhole.

Your Team Is Never As Tough As They Can Be And You Can Never Assume They Are Tough Enough
When looking in the dictionary you see descriptions for toughness such as: hard to break but not necessarily hard to bend, difficult to get the better of, apt to be aggressive, able to resist, etc. When we think of toughness we immediately think of mental toughness and then physical toughness. LET ME SAY AT THE OUTSET THAT A TEAM WILL NEVER BE TOUGH WHEN THEY ARE COACHED BY A STAFF OF COACHES WHO ARE NOT. The hardest thing we have to do each day as coaches is saddle up and face the day with the
attitude we want our players and team to adopt. WE CANNOT SELL THEM SOMETHING THAT WE DO NOT OWN. My most difficult task as coach is to be tougher on myself and more demanding than I was the day before. THIS IS ESPECIALLY IMPORTANT WHEN YOUR PROGRAM IS WINNING GAMES. For every 100 who can handle failure, there is but one who can handle success. Winning can weaken the resolve of those
who worship winning and do not plan, practice, play and coach to a higher standard. THE BEHAVIOR OF YOUR PLAYERS IN THEIR ACCEPTANCE OF FATIGUE, BAD CALLS, TURNOVERS, MISSED SHOTS, BEING OPEN AND NOT GETTING THE BALL, HARASSMENT FROM THE OPPOSING FANS, TRASH TALK FROM OPPONENTS, AND THEIR TEAMMATES’ FAILURES AND SUCCESSES will tell you all you need to know about how well you are teaching the life long lessons of toughness.

Players And Coaches, Everyone In Your Program Must Be Willing To Change When It Is For Their Improvement And The Betterment Of The Team
This is the thing that always concerns us in our recruiting of players. We are not for every player. The solid programs will have attrition because there is a standard, a level of excellence, a desire for learning and improvement on and off the court that is demanding and is therefore character building in nature rather than a
look the other way. That is probably why we have not had many transfers in our program from four year schools or junior colleges in our 30 years of head coaching. The few that we have had were outstanding kids and developed into great team players. As a coach you are constantly studying to find a new and better way to teach
the game and YOU USUALLY FIND THAT THE OLD SCHOOL WAYS ARE STILL THE BEST. The TEST OF TIME is the master teacher and is cruel but the fairest of all teachers. You will never have a team if the best athlete on your team is not someone willing to be molded and taught to play the game and conduct them self in the proper manner. If your leader is of suspect character, the fabric of your team will be torn apart when the first negative winds attack from outside the program. If your best athlete is a great leader, no amount of negativity will rip the team apart.

Thinking As A Team, Becoming A Team, And Always Remaining A Team Is the Single Best Thing That You Can Teach Your Players For The Present Time And For Their Life After They Leave The Program

When you play a game, travel on the road games, register for classes waiting in long lines, eat in a restaurant, befriend or ignore a young child after a game, respect or taunt an opponent, deal with winning and losing, you are making a statement about what the core values are in your program. Coaches, players, and teams are teaching lessons in every encounter along life’s way. We hope it can be said of our program that EVEN WHEN THEY LOSE THEY WIN. The way you accept the hand life has dealt you vividly tells everyone else what your true character is. The great boxer Sugar Ray Robinson said, “You can tell the most about a man when he is getting whipped”. That is oh so true in a basketball game and life. YOU DO NOT HAVE TO WIN A CHAMPIONSHIP TO BE A CHAMPION. As a coach, you are responsible for the actions of your players and team. You are not a coach if you look the other way and ignore bad behavior. It must be dealt with or you are harming your players for a lifetime. Philippians 2:1-8 gives a description of what a team attitude should be like for coaches and players.

Transition Defense, Intensity On Defense, Rebounding On Both Ends Of The Floor, And Turnovers Are Key Factors You Can Help Your Team Become Aware Of In Practices And Games

Transition Defense-–Try to develop a philosophy of transition defense that fits your style of play on both ends of the floor. It might vary some each year depending on your personnel. Stick with it in every shooting drill, all break down drills, 5/0 work, and 5/5 scrimmage. This will be a key to not giving the game away.

Intensity on Defense—Too many ways to defend a particular offensive move means no way to defend it because players think too much. It has to be instinctive quickness. If a player lacks quickness, then this is even more vital. As Jerry Tarkanian said, “The more they think, the slower their feet get”. Keep it simple on defense and lean to the aggressive way of doing things and your team will make more plays defensively.

Rebounding on Both Ends of The Floor—You must chart effort in order to see if players really value possession of the ball and realize that rebounding is most often the way you gain possession of the ball. Turnovers—We got a great idea from Porter Moser, the head coach at the University of Arkansas-Little Rock. He puts so many basketballs in the ball rack and removes one for each turnover. When all the balls are out of the rack it means that there will be morning running. We have modified it some because our coaching staff does not like to run in the early mornings. Porter is a very young coach. We put two balls in the rack and when we have turned the ball over three times the offending team will run or do whatever consequence we think is best. We like it, it is simple. It drives home a point. BALLS IN THE RACK makes our players realize that everything they do in practice will effect what they do in a game.